53 years in the making, the Peninsula’s Cañada College finally gets its pool

Ever since Cañada College in Redwood City opened in 1968, there has been a sign in the gymnasium pointing the way to a pool that wasn’t there.

Now, after 53 years, the pool has finally been built, and the sign pointing to it is gone. So is the gym. It has all been replaced by an angular, futuristic fitness center that hovers like a massive drone above Interstate 280.

Called the Kinesiology and Wellness Building, it opened to students when classes began this month and is slated to open to the general public as a health club by the end of the year.

The facility could prove to be a boon for Redwood City, which lacks an outdoor, year-round public swimming pool for its 85,000 residents, according to Eric Newby, recreation manager for sports and aquatics for the city.

The town of Woodside, which borders the Cañada campus, has only the pool at Woodside High School at the far eastern edge of town, and the pool at the exclusive country club across the street.

“Having the two new pools on the campus will bring a much needed resource to families and athletes in the region,” Amy Buckmaster, a Redwood City resident and Cañada alumna who is president and CEO of Chamber San Mateo County, said by email. “There is a strong affinity for aquatics in our area and this new center will be a gem for classes, competition and exercise.”

The new gym and pool complex took five years to conceptualize and construct. The building was built with climate change in mind: Its exterior of polycarbonite panels, glass and steel is resistant to wildfires, and built-in shade structures can provide relief from rising temperatures.

The health club is still a concept, and it doesn’t even have a name yet. Michael Claire, chancellor of the San Mateo County Community College District, sees it as similar to the San Mateo Athletic Club at the sister campus, College of San Mateo. Opened in 2010, it had 6,000 members before the pandemic. Run by a private operator since its opening, that contract has not been renewed. Starting Jan. 1, 2022, the San Mateo Athletic Club will be operated by the district itself and run by community college employees, as will the upcoming club at Cañada.

The facility boasts a commanding southerly view, a panorama that reaches over that other Peninsula college — Stanford University — and all the way down Silicon Valley to the mountain ridges beyond San Jose.

The 116,000-square-foot complex was designed by ELS Architecture and Urban Design of Berkeley.

“When you tear down a concrete box gymnasium, you want to replace it with a transparent state-of-the-art athletic center,” said principal architect Clarence Mamuyac, who designed it with colleagues Christopher Jung and Tracy Chan.

The site plays up the view by framing it with a Richard Serra-inspired rectangular steel sculpture that is the signature artwork selfie photo op.

“It was all about the panoramic views that are atop this hill,” Mamuyac said. “The views get better the higher up you go, so we turned the roof into programmed area and put a sunhat on it for shade.”

The $120 million project was funded by Measure H, a San Mateo County Community College District bond that passed in 2014 and authorized $388 million to improve College of San Mateo, Skyline College and Cañada. The Kinesiology and Wellness Building is the largest project funded by Measure H.

Chancellor Claire championed the project. He was a swimmer and water polo player at Sequoia High School in Redwood City, and he enrolled at Cañada as a freshman in 1980 and recalled an attempt to seek out the college’s aquatic facility.

“I was wandering around, saw the door that said ‘pool,’ opened it, and there was nothing there but an empty field,” he said. “It was that way from 1968 until now.”

Academically, the building will support dance and kinesiology programs. The main extracurricular function is to house the athletic department at Cañada, which fields teams in baseball, men’s soccer and basketball, and women’s soccer, volleyball, and tennis.

Claire hoped that the old sign pointing to the never-built pool had been salvaged in the demolition. It could finally be put to good use.

“I never thought I’d see it in my lifetime,” he said. But there it is, right where it has belonged all along.

And there are two of them, perhaps to make up for lost time. One is a 25-meter lap pool with seven lanes. The other will be a warm-water infinity pool with an edge that allows the water to merge with the deck, like at resorts and spas.

Public tours of the new facility will likely begin in September with hopes of a membership plan, open to anyone, to be offered by the end of the year.

“The first priority is to open up the pools,” said Kim Lopez, interim president of Cañada College. “We’re still trying to figure this all out.” 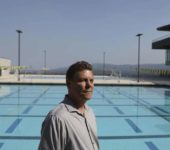